Abstract: We regard a smooth, 𝑑=2-dimensional manifold ℳ and its normal tiling M, the cells of which may have non-smooth or smooth vertices (at the latter, two edges meet at 180 degrees.) We denote the average number (per cell) of non-smooth vertices by 𝑣¯⋆ and we prove that if M is periodic then 𝑣¯⋆≥2. We show the same result for the monohedral case by an entirely different argument. Our theory also makes a closely related prediction for non-periodic tilings. In 3 dimensions we show a monohedral construction with 𝑣¯⋆=0. 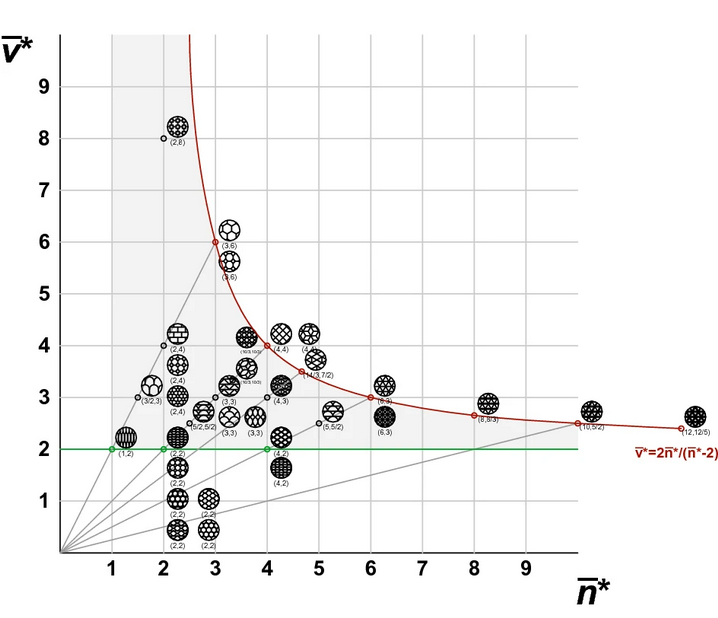 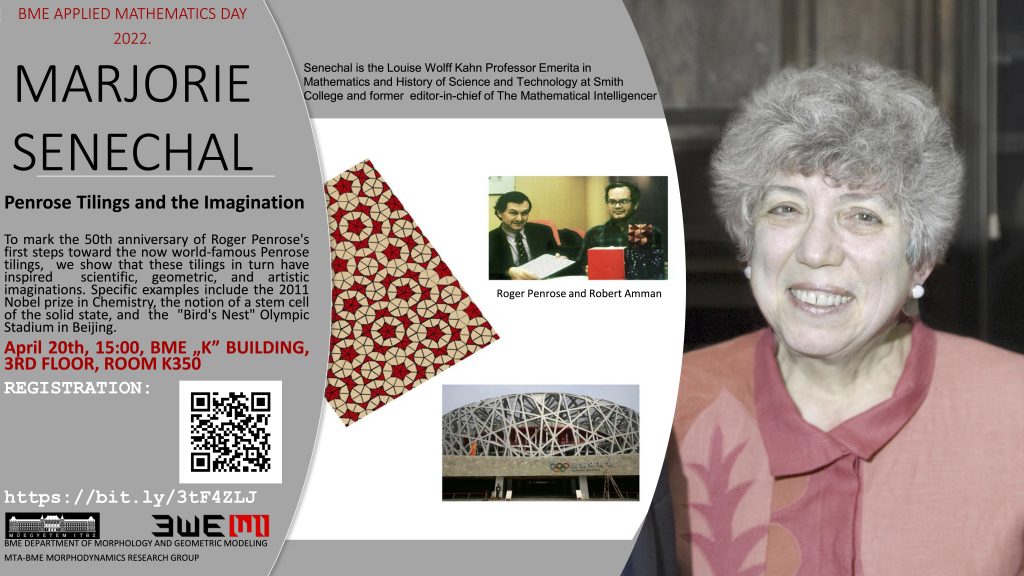 Gábor Domokos will give a lecture “The invisible cube” at the University of Pennsylvania Stuart Weitzman School of Design on 16th February, at 6pm (Central European Time). The lecture gives insight into the work of the Morphology and Applied Geometry Department and the Morphodynamics research group. Follow the lecture online: zoom link.

Abstract: The monostatic property of convex polyhedra (i.e., the property of having just one stable or unstable static equilibrium point) has been in the focus of research ever since Conway and Guy (1969) published the proof of the existence of the first such object, followed by the constructions of Bezdek (2011) and Reshetov (2014). These examples establish
as the respective upper bounds for the minimal number of faces and vertices for a homogeneous mono-stable polyhedron. By proving that no mono-stable homogeneous tetrahedron existed, Conway and Guy (1969) established for the same problem the lower bounds for the number of faces and vertices as
and the same lower bounds were also established for the mono-unstable case (Domokos et al., 2020b). It is also clear that the
bounds also apply for convex, homogeneous point sets with unit masses at each point (also called polyhedral 0-skeletons) and they are also valid for mono-monostatic polyhedra with exactly one stable and one unstable equilibrium point (both homogeneous and 0-skeletons). In this paper we draw on an unexpected source to extend the knowledge on mono-monostatic solids: we present an algorithm by which we improve the lower bound to
vertices on mono-unstable 0-skeletons. The problem is transformed into the (un)solvability of systems of polynomial inequalities, which is shown by convex optimization. Our algorithm appears to be less well suited to compute the lower bounds for mono-stability. We point out these difficulties in connection with the work of Dawson, Finbow and Mak (Dawson, 1985, Dawson et al., 1998, Dawson and Finbow, 2001) who explored the monostatic property of simplices in higher dimensions.

Abstract: Impact induced attrition processes are, beyond being essential models of industrial ore processing, broadly regarded as the key to decipher the provenance of sedimentary particles. Here we establish the first link between microscopic, particle-based models and the mean field theory for these processes. Based on realistic computer simulations of particle-wall collision sequences we first identify the well-known damage and fragmentation energy phases, then we show that the former is split into the abrasion phase with infinite sample lifetime (analogous to Sternberg’s Law) at finite asymptotic mass and the cleavage phase with finite sample lifetime, decreasing as a power law of the impact velocity (analogous to Basquin’s Law). This splitting establishes the link between mean field models (curvature-driven partial differential equations) and particle-based models: only in the abrasion phase does shape evolution emerging in the latter reproduce with startling accuracy the spatio-temporal patterns (two geometric phases) predicted by the former. 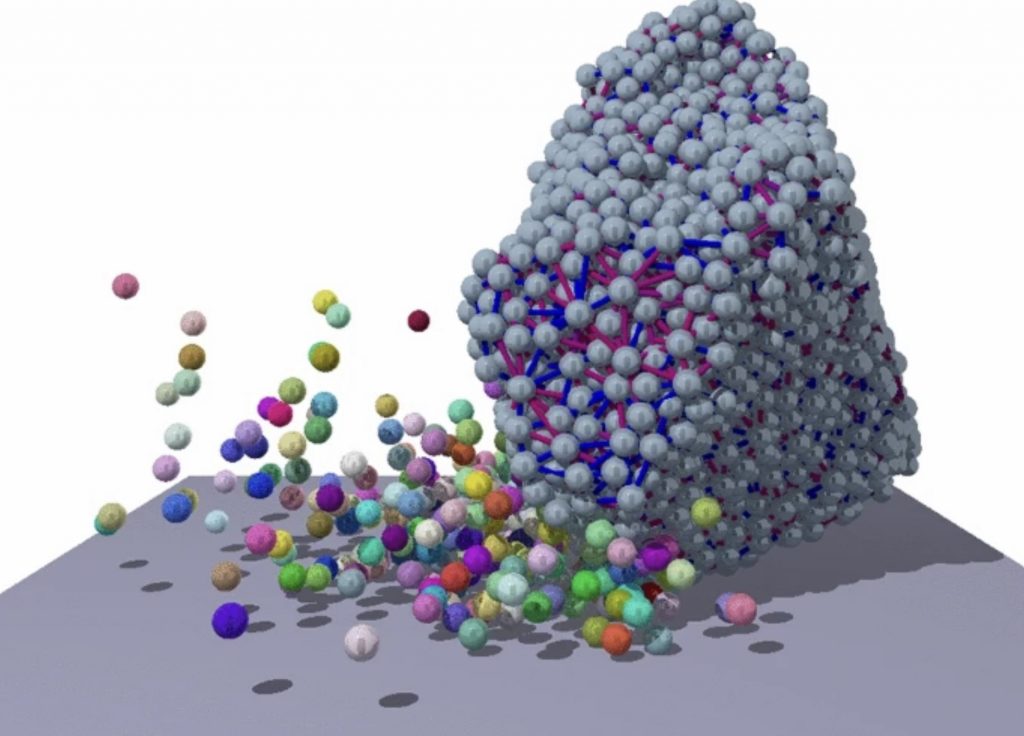 Abstract: Steinitz’s theorem states that a graph G is the edge-graph of a 3-dimensional convex polyhedron if and only if, G is simple, plane and 3-connected. We prove an analogue of this theorem for ball polyhedra, that is, for intersections of finitely many unit balls in ℝ3.

After our short visit and consultation in Sienna, Italy, before the global pandemic breakout, our colleagues finally had the opportunity to construct their own scanning equipment. We are looking forward to see their scanning results and experiences with the newly built devices. 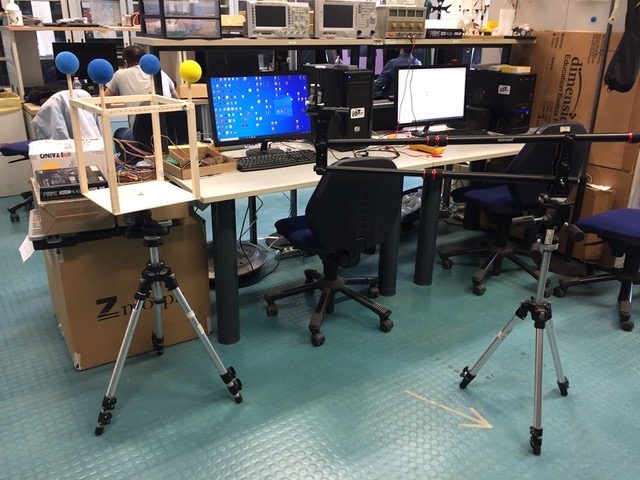 The Gomboc simulation software – whose name was chosen after the Gömböc of Gábor Domokos and Péter Várkonyi – played a crucial role in the the 36th America’s cup.

An article about the Gomboc software in the 35th America’s cup (in English): Gomboc: A design high-flier for ETNZ